Skip to content
A Clear Prayer: How We Found Camp Miller A Clear Prayer: How Having a Vision Led Us to Camp Miller

A Clear Prayer: How Visualization Led Us to Camp Miller

At the recommendation of a friend, I’m reading a book called “The Circle Maker” by Mark Batterson. It’s about the power of circling things in prayer- be it your family members, the vision of a $1,000,000 check, or a prime piece of property. Whatever it is that you want, either physically or imaginatively circle that thing in prayer. Over and over and over again.

Full disclosure: Matt and I are not particularly religious people. We do, however, believe in the power of faith, goal-setting, and visualization.

Which, if you think about it, is exactly what prayer is.

I am getting a lot out of this book. And like so many other books in my life, it’s coming to me at the right time.

The dream turned real. Our view of the water from our little black cabin in the woods.

About five years ago, both Matt and I had this vision of shifting our careers and moving to a lake. We talked about this dream in vivid detail. We knew the house would be painted black. We could imagine exactly how we’d feel in this home, looking at the water. Back then, we had no idea how this would be possible. So many obstacles stood in the way. But we couldn’t help dreaming, talking, imagining, and planning.

As time passed, other more immediate dreams took precedence. I’m sure you know how that goes.

And then one day, it all came into alignment. It happened a few months after buying Camp Miller, during our first overnight stay when I looked up and realized that everything had fallen into place.

Camping with a Baby: A Nice Idea in Theory

Camping with a Baby: A Nice Idea in Theory

When picturing this first sleepover, keep in mind the following amenities we didn’t have: a kitchen sink, screens on the windows, air conditioning, a bed.  Miller was 3 months old, so you might also picture the amenities we had to bring along: diaper bag, blankets, multiple outfits, burp rags, bottle warmer, extra bottles, a breast pump and pump parts, stroller, baby carrier, etc…

For our family, spending the night at the cabin was essentially camping with a baby.

Our first day was a bit discouraging.

We planned on getting there by 10 am. After a late start and an emergency feed session on the side of the highway, we finally pulled up to the cabin well passed noon.

Miller was teething, so instead of working on renovations, one or both of us was tending to him constantly.

With our two-day getaway, we planned to paint the outside of the house. We brought two cans of paint, thinking that would get us most of a first coat. Instead, the dry old wood siding sucked up paint like rain in a desert. Work was SLOW and we used the first bucket of paint on part of the front of the house alone.

For dinner, we brought our favorite frozen pizza. After a rough couple of hours of painting and teething, we were looking forward to this treat. Instead, when we fired up the old stove, the cabin filled with the smell of mouse pee. Yes… mouse pee. Apparently some wildlife had found its way inside the cabin. We threw the stove outside to the scrap pile and ate pop tarts instead.

Scenes from life at the cabin: a bassinet and a pullout couch, painting the house, and realizing that all the things I love are snug in one magical place.

Despite the rough start, everything shifted when the sun went down. By 9 pm, Miller was sleeping soundly and the lake’s nocturnal wildlife had come alive. We made a bed on the pullout couch and sat looking out the sliding doors while we listened to all the birds and bullfrogs. The lake had gone completely dark- nobody who lives around it keeps lights on. Suddenly, we remembered why we like camping.

Miller slept through the night, waking at 5:00 for his morning feed. The peaceful feeling from the night before carried over. He drank a bottle and went gently back to sleep. Julie, our dog, made a nice nest in the pullout couch and also went back to sleep. Matt and I enjoyed our morning coffee, again listening to the sounds of the lake. Sometime before six, Matt grabbed a paint brush, stepped out onto the deck, and started the day’s work.

While I pumped, I read the only book I’d brought with: The Circle Maker.

“God does not answer vague prayers… we [would] end up wandering the desert for 40 years” (27).

It was just what I needed that morning. 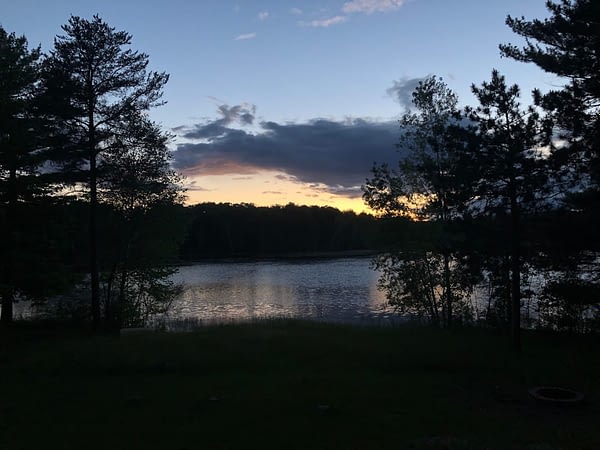 That evening, when the sun went down and everything made perfect sense.

I finished pumping, noted that both baby and dog were still sleeping (a miracle in itself), grabbed another paintbrush, and joined Matt outside.

We painted until both buckets were gone. Miller was still sleeping, so then we weeded the front beds, revealing beautiful hostas and lillies. When we stood up and stood back, I couldn’t believe what I saw.

A little black cabin on the water in the woods.

“God does not answer vague prayers.” I believe this fully. Call it prayer, visualization, or goal-setting, the process is the same. Picture what you want in perfect clarity. Then go to work.

Five years have passed since that first prayer. A lot has happened between then and now. And yet, here we are. Standing in front of our little black cabin on the water in the woods. Baby asleep inside. Dog curled up next to him. God is good.

Waking up happy and rested. Don't let Miller's face fool you, we were having a great time.

So that’s the story. We have been slowly renovating over the course of the year. Starting spring of 2021, Camp Miller will be available as an vacation rental. (Find our listing on Airbnb and VRBO, live March 2021!)

At this time, I can only offer you truly low-quality “before” photos. Typically, I wait to publish and promote blog content until I have the “after” pictures. But what the hell. Enjoy viewing our cabin in all it’s pre-renovation glory!

Check out the Renovations page to view the full gallery. I will be adding photos to this area over the next few months. Want to see more photos now? Go to the home page and subscribe– I’ll send them straight to your inbox!

My question for you this week:

Have you had a moment like this? When you look up, away from the daily grind, and realize that your prayers have been answered?